They express themselves eloquently. (A wag and a lick speak volumes.)

They have an awesome sense of timing. (They know the best moment to ask for a walk.)

They are souls brimming with emotion. (Just look into their eyes.)

Haiku is for the dogs

It’s no surprise, really, that my dogs have chosen to take up poetry. But haiku? Based on a type of ancient Japanese verse, haiku in English is written in just three lines, with a pattern based on syllables: five syllables in the first line, seven in the second and five in the third and final line.

The challenge is to capture a feeling, a moment, a thought, in those three short lines. Kind of like Twitter, only deeper.

As for the dogs, they’re not that good at rhyming, and they don’t have the patience for long-form free verse, so they chose the haiku form. I think it’s more efficient and easier to translate from canine to human. The three poetdogs live in New Jersey, sharing their home with a couple of people and too many cats (four)–who also write poetry. (You can read their work at Haiku by Cat.)

Rescued from shelters, Lilah, Jasper and Tucker appreciate their home and their friends, and spend their days playing games of Chase and That’s My Stick, or relaxing in the grass exchanging stories of deer chasing and the squirrels that got away. Feel free to follow them on Twitter @HaikuByDog, read their texts on Dogs and Cats Texting (yes, they text, too) or read about them on the Life with Dogs and Cats Facebook page. 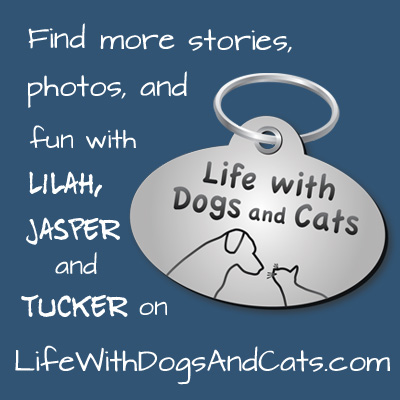 Find photos, texts, stories and more, featuring the dogs of Haiku by Dog.

The Dogs of Haiku By Dog

We're not just poets. We also have cell phones--and send text messages. Check us out on Dogs and Cats Texting.com.